Estate of artist Jack Spencer McClain best known for his commissioned sculptures and designed and executed murals in cities such as Hermosa Beach, Beverly Hills,  Hollywood, Palos Verdes, Pasadena, Redondo Beach.  Studied with Jose Clemente Orozco and George Grosz.  Mostly influenced by symbolism I have his entire studio contents filled with paintings on oil and canvas, watercolors, pastels, as well as his assemblage Zorthian style of art.

Lifetime member of Screen Writers’ Guild West and collaborated on numerous dramatic television scripts such as Bonanza and Rawhide and screenplays which I have a few of them in the sale.  McClain created three poster designs for the 1981 Writers Guild strike.  He had years of art work commissioned by NBC Television, known for  his publicity designs in the early 1960’s for recording artists Odetta, known as the voice of the Civil Rights Movement, Joe and Eddy of gospel and folk, and the Clancy Brothers.

Books, albums, tools, old radios and parts, kitchen items, plants and patio furnishings. I am just going to let the pictures speak for themselves.

Parking issues.  Please be aware parking space is very difficult due to the hillside.  Parking is permitted only on one side of the street.  It is what it is.  Please do not disturb the house sitter. 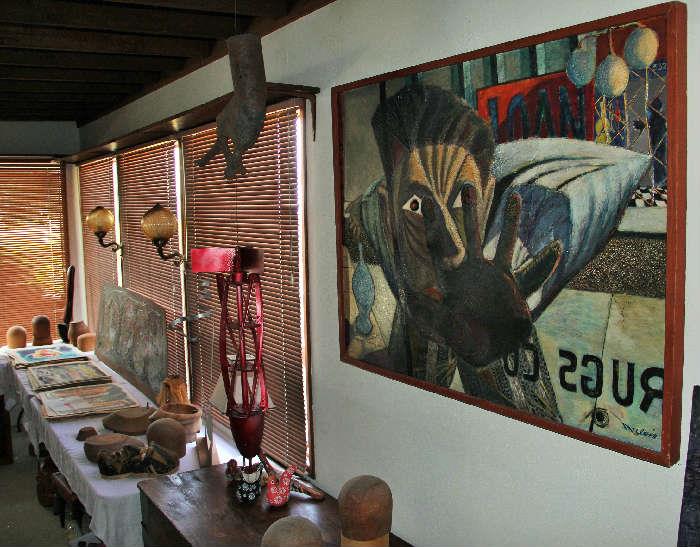 I have his entire studio contents filled with paintings on oil and canvas, watercolors, pastels, as well as his assemblage Zorthian style of art.

Estate sales can arise under circumstances such as a death in the family and the contents of the home needs to be reduced to cash for estate distribution purposes. Estate sales are necessary if there is a move due to downsizing of a lifestyle or relocation.
Book Us Now

Why Are We The Best?

Over 20 Years of Experience

Zoe TeBeau Estate Sales has been serving the marketplace for over 20 years covering the greater Los Angeles, Orange County, Riverside, San Bernardino and Palm Springs areas. We have a tremendous following for all of our sales.

As one of a small group nationwide of certified appraisers, I can provide appraisals that include legal documentation of antiques recognized by both the Internal Revenue Service and The Appraisal Foundation. After knowing the true value of what was handed down in your family, you may even decide to take better care of it.

There is never a charge for an initial consultation. An appointment will be set up to meet with the family members who would like to be in attendance and when a fair representation of what will be offered in the sale. During this appointment, an estimate of potential outcome will be a part of the consultation.

A Word From Our Clients

What can I say. I’ve worked with Zoe many times over the years and she is always professional and accurate. We’re lucky to have her!

My clients are often in a sensitive position during estate transfers and Zoe TeBeau’s company always make sure they are treated with respect and get maximum value for the family.